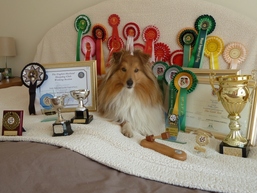 Sadie & Thomas (Shetland Sheepdog) showing all the rosettes and trophies won in Competitive Obedience:
"We only started competing in Pre-Beginners in 2011, we lost the 2012 season as Thomas had an operation, and in 2013 Thomas won his 3 A’s making him B and C.
We both absolutely love Obedience I never knew that it was something that other breeds could do and was recommended to give it a go by a Pet Dog Training Club we were attending.  I would love to encourage other ‘pet dog owners’ give this a go with their dogs it is so much fun and rewarding to train a dog to this level.  I never thought we could do it. We have found so many people very helpful and encouraging to us on our way up the ladder in this hobby."
Printed with permission of Sadie - many thanks.

If you are placed 1st to 6th at a show, then it is usual to receive a rosette and a prize card according to your placing.  Occasionally you may also be given a trophy. * Judges critiques can be found on  ObedienceUK Show Reports  and in DTW (Dog Training Weekly) magazine (you need to subscribe or borrow a magazine to view these)
If you have had a great day and have a rosette, these are usually presented in the CLASS RING at the end of the day after all the judging (and possible run offs) have been done.  However at some shows there is a 'presentation area' away from the rings where the prizes are given out.  It is usual for people outside the ring to 'clap' and 'cheer' during the presentation as long as this won't disturb other people who maybe still working in nearby rings.
Photos are sometimes taken and often appear on Out and About section of ObedienceUK.net.
The Show Secretary informs the Kennel Club of your Win or place at the end of the show.
However - it is up to you to keep records of your dogs successes and
up to you to enter the correct level of class accordingly (see 'Class Levels' page)
Kennel Club - Obedience Awards page here

These are certificates produced by the Kennel Club and can be awarded to those in Introductory, Pre-Beginner and Beginner classes who have obtained a reasonably low mark in the class (regardless of if you were placed in the class or not).
These certificates are signed by the Judge on the day and given to you at the ring at the end of judging.
It is the competitors responsibility to ASK if these certificates are available - they are only given out IF asked for.
HOWEVER - these are only available if the Show has requested them from the Kennel Club - not all shows offer them, but it is worth asking the Judge (or Show Secretary if the Judge is busy) if they have been given any to distribute.

If you have had some placings (1st to 6th) in classes then those placings can mean that you are accumulating points towards the 'Excellent' qualification for that class. The following are the letters that you can put after your dogs registered name according to the point gained:
Example of use of Award:    Whatever My Dogs Name Is  Beg Ex
Kennel Club 'Excellent' Qualification claim form

The title of Obedience Champion can be claimed by any dog that has won Championship Class C on three occasions under three different judges, or which wins a Crufts Championship Obedience class.
Example of use of Award:    Ob Ch  Whatever My Dogs Name Is