ObedienceUK, Competitive Obedience, Obedience Shows, Dog Sports, Dog Activities, The Kennel Club, Dog Training, Heelwork,
See VIDEOS of Crufts here
Crufts is heldover 4 days in March of each year at the NEC, Birmingham - some info below is from the Kennel Club Crufts website
Obedience competitions take place over the four days of Crufts, and are held in the ring dedicated to Obedience located in Hall 5 of the NEC, holding over 1,000 spectators.
There are three different competitions in all:

Seven teams compete, representing the UK regions: Scotland, Northern, Midlands, Western, Southern, Wales and Northern Ireland.  All five levels of obedience competition are on show, and the aim of the day is to demonstrate a range of breeds and competition levels in obedience. Each team will have seven handlers and dogs:
The team managers are responsible for selecting their team members, but they must include a variety of breeds including cross breed dogs, even though the border collie/working sheepdog is the most numerical breed competing.  The Inter-Regional day is a showcase to demonstrate that almost any dog can compete and be successful in Obedience. This competition has run for many years and the teams work hard to do their best. It is always a closely fought event.
If you are interested in being part of future Inter-Regional Team events then please contact your area Team Manager (links below) - it is usual for 'try outs' to be held and then the Managers will pick their teams from those doing well in the various 'try outs'.
2017 Inter-Regional Team Manager contact details   |   2017 Inter-Regional competition rules 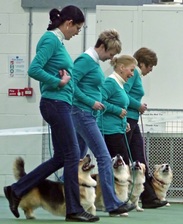 Obreedience is aimed at pedigree breed dogs, that are 'non traditional' obedience breeds.  Exercises are. Group heelwork, then each team member does one exercise each, scent on articles, send to bed, stop on recall, retrieve. So its a mix of good citizen exercises and obedience exercises.

If you have queries on Obreedience or would like to put forward a Breed based team please contact: katharine.broers@thekennelclub.org.uk

Article from the Kennel Club November 2013:

Mixing the best aspects of obedience with the camaraderie found amongst breed enthusiasts, the Kennel Club is launching a new and exciting display competition at Crufts 2014 called Obreedience.

The aim of Obreedience is to encourage more breeds to have a go at some of the exercises generally associated with obedience in a less formal but nonetheless competitive environment. Obreedience will be a team event and highlight the abilities of different breeds in a relaxed and fun display.

Each team will comprise four handlers and four dogs who will take part in two rounds of competition. The first section will see all four dogs complete a round of heelwork together as a group, with the dogs being assessed on their ability to complete different moves whilst remaining synchronised with their team mates. This first round will be marked out of ten points.

Round two will feature four set exercises, and each team member will need to successfully complete one of four different exercises to secure as many points as possible for their team. The exercises will include a Retrieve (handler’s own article), Send to Bed, Stop the Dog and Scent Over Articles. Round two will be marked out of 40 points (10 per set exercise). Once the teams have completed the two rounds, the scores will be added up and the winners and runners up will be announced.

Obreedience will be held in addition to the many other fun obedience events that take place during Crufts, and help to add to the competitive atmosphere associated with the discipline. in 2014 Nine different breed teams will be showcasing their abilities: Hovawarts, Spanish Water Dogs, Tibetan Terriers, Rottweilers, Papillons, Afghan Hounds, Corgis, Boxers and Staffordshire Bull Terriers.

Vanessa McAlpine, Crufts Manager said: “We are thrilled to be launching this new Obreedience display competition at Crufts 2014. It will be exciting to see the various breeds showing their skills in obedience whilst spectators cheer on their favourite teams.”