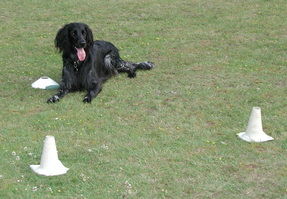 Heidi (Munsterlander)
In Class B & C only:
The short answer is the dog to wait at your left side, then to run in a straight line to the marked area and to lay down in the area, then you walk as instructed by the ring steward and call your dog to you left side and do heelwork (see 'What is Heelwork') until told to halt.
All this in a public area, in a marked out ring area.

The long answer is set out below ...

There are probably only 3 basic 'types' of sendaway (Back Marker, Box & Run Through), but all those types then also have varying difficulties depending on the type of 'markers' used to define a sendaway area and the distances involved.
Once the run out and drop have been completed (as detailed below) then when instructed the dog is to be called to join you in heelwork, which is considered to be like a Class 'A' Recall  (see 'What is Recall' page).

Handler Commands on the 'Send' ..

In B and C commands are normally only a single command OR signal and dogs name if wished,
however for the send section of the sendaway, you can actually
use an arm signal as well as a verbal command.

Back Marker - Run Through Sendaway ..

Box (no back marker) Sendaway ..

Run Through (no back marker) Sendaway ..

What to Expect in the ring:
The 'Sendaway' exercise begins with the dog sitting beside you (on your left side) - you will be directed by the ring steward to the starting position and they will wait for you to set your dog up beside you.
Only a command OR signal (and dogs name if you want to) can be used at the start of this exercise, extra body signals, head movement during the exercise will mean loss of points. You cannot touch or verbally encourage your dog during the exercise.

Instructions you hear may be something like:
... so; you now ask your dog to run out to the sendaway area - NOTE:  In B and C commands are normally only a single command OR signal and dogs name if wished, however for the send section only of the sendaway, you can actually use an arm signal as well as a verbal command - it is then up to you to command your dog to drop in the required area - you will not be instructed to tell your dog to lie down,
... then you will hear instructions as per heelwork, but you will be walking the judges chosen pattern with turns, but without your dog - the dog needs to say in the down in the sendaway area whilst you are walking, then at a certain distance you will hear:
... So; you call your dog to join you in the heelwork and continue forward together in the direction as instructed by ring steward until you then hear something like:
At the end of heelwork you then hear:
... So;  you can now touch and verbally praise your dog for doing the 'Sendaway and Call Up'.

What You Might Lose Points for During the Sendaway and Call Up ..

All judges marks are 'graduated' according to the severity of the fault.  So any part of the exercise might be marked 1/4 of a point if a minor fault occurred or substantially more if a major fault occurred.
All the individual faults marks are added together to give the overall score for the recall exercise.
You may also lose marks for intentional or unintentional body signals (hand, arm, head, shoulder movements).
The Call up will be judged as per the 'A Recall' and 'Heelwork' faults.
Each time your dog does one of the things below in the sendaway you may lose marks